Join us this fall on Saturdays from Noon – 3pm for Family Fun Weekends at the EcoZone!

Step into the EcoZone, our multidimensional, interactive exhibit area that focuses on the ecosystems of southeastern Massachusetts. The main habitats that comprise the EcoZone are Wetlands, Woodland, Meadow and Tidal Zone.

The ribbon was cut at an opening reception Tuesday, January 8, 2002, when Animal Planet’s Jeff Corwin introduced our collection of turtles and frogs into their new homes. In fact, Jeff Corwin was the driving force behind building the EcoZone. He approached us more than two years earlier, with the idea of creating an exhibit that would represent the ecosystems of Southeastern Massachusetts, and offered to help us raise the funds to build the EcoZone.

Features of the woodland area include a life-sized model of a red maple tree whose branches extend over the Turtle and Frog Ponds. Tree roots allow our turtles to climb up to an area at the base of the red maple tree. A hollow log, large enough for both children and adults to crawl through, divides the Turtle and Frog Ponds. There are peepholes on the interior walls of the hollow log that allow you to peek into the ponds and see turtles and frogs swimming around. A raccoon can be seen reaching into a hole on the top of the log to catch insects. The Frog Pond is bordered by grasses, ferns and swamp azalea, and contains bullfrogs. A charming little wooden bridge leads you out of the woodland area into the Meadow Zone.

The EcoZone is a principal partner for Animal Planet’s R.O.A.R. We share their commitment to make the world a better place for animals and all living things. You can show your commitment by supporting the Science Center. The EcoZone is still under development and as funds are raised, new exhibits will emerge.

Sponsorship is available at many levels, from the sponsorship of an entire exhibit to an insect or animal that will live in the exhibit. No donation is too small! Please call Executive Director, Chris Jacobs at: 781-659-2559 to find out how you can help – today!

Come meet some members of the EcoZone! 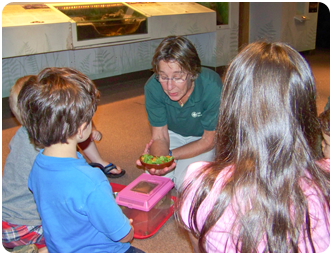 Stop by the EcoZone to meet some of our most popular residents: an American Toad, Eastern Box Turtle, Spotted Salamanders, Spring Peeper and Grey Treefrogs. All local species, they’ve taken up residence in the Creature Corner, a display of live local reptiles and amphibians in smaller separate environments.

Other exhibits include the Vernal Pool exhibit, which is a cutaway diorama of a springtime vernal pool that magically transforms (with the push of a button) into the autumn version where the pool dries up and the animals change. The Night Time exhibit is a misty evening scene with twinkling starlights, and an animated video about nocturnal animals, “While You Sleep, We Fly and Creep”. It’s a wonderful introduction to our Great Horned Owl, who resides behind the building.

Our Red-tailed Hawk is a non-releasable raptor, native to our region, who is used in our educational programs to focus on the conservation and protection of local animal species. 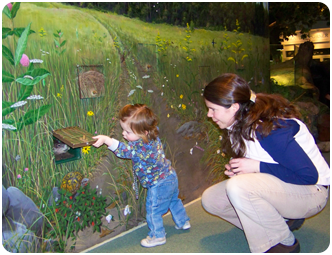 Our male Great Horned Owl is a non-releasable imprinted exhibit raptor. Our programs frequently explore owls as nocturnal animals and raptors, study their adaptations, and students dissect their pellets!

Look for more raptors and expanded aviaries in the coming year.